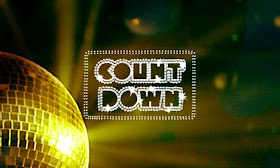 Well, we’ve come to the end of another year. When I was a kid, I loved listening to Casey Kasem’s Countdown of the top 100 songs on New Year’s Eve. They’d play on the radio all day, with the number one song announced about midnight.

I remember when Three Dog Night’s “Joy to the World” topped the chart in 1971. I was at a sleepover of my church’s junior high youth fellowship at someone’s house that New Year’s Eve. We were so happy when the song came on that we grabbed pots and pans from the kitchen, ran out on the front porch, banged the pans and sang along at the top of our lungs. A moment of pure, simple joy.

So in time-honored fashion, I’ve compiled a countdown of my top 10 posts of the year. They’re a mix of reflections, tips, strategies, stories, and information I’ve gathered. For 2014, the winners are:

If you have time to read just one, you can’t go wrong with #3, The Two Most Important Things Genealogists Can Do Now. Following an all-day seminar, I reflected on sage advice from Tom Jones, who urges all family historians to preserve today what could be lost tomorrow.

A good starting point, I think, for setting goals for the new year.

And now, in the spirit of celebration, here’s Three Dog Night performing “Joy to the World”:

A Merry Christmas to You 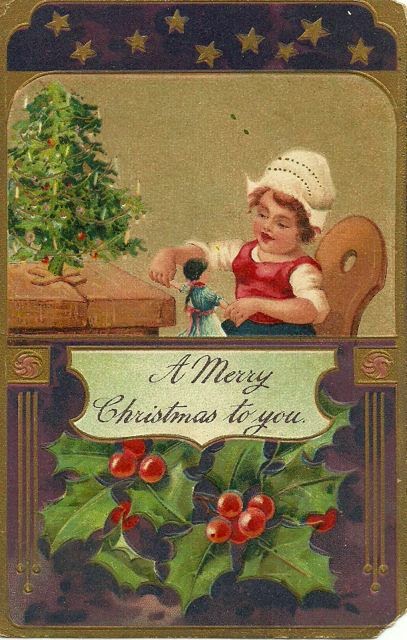 Merry Christmas, dear readers and friends! May this holiday season bring you joy, and your new year be filled with health and happiness!

Tips for Planning Your Trip to the Family History Library 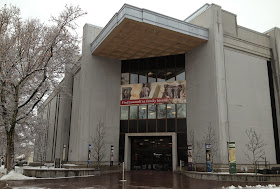 Are you planning your first research trip to the Family History Library (FHL) in Salt Lake City in conjunction with the upcoming Salt Lake Institute of Genealogy,  FGS 2015 Conference and/or RootsTech? Wondering what’s the best way to prepare for it? I was in your shoes a few years ago. I vividly remember what it was like walking into the FHL for the first time, feeling a mix of awe and trepidation at its enormous size. So I’ve pulled together some tips that I hope will help you.

A good place to start is Tips for Visiting the Library on the FamilySearch website. Another handy resource is Janet Hovorka's The Chart Chick's Guide to Salt Lake City, available as a free PDF download. The FamilySearch blog recently posted Exciting New Changes at the Family History Library. The FGS Voice Blog offers A Virtual Tour of the Family History Library with hours and layout of the building, to help you know what to expect.

If you read these, you’ll notice a few common threads. One thing everyone recommends is that you do some prep work at home before walking in the door of the Family History Library.


But how, exactly, do you do that? Start by identifying the books, journals, and microfilm reels you want to look at from the FamilySearch catalog. Here’s an easy method for determining what you want to do: 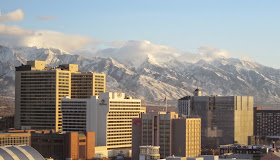 Another common question is what should I bring with me? Essentially, you'll want to bring the research tools you're most comfortable with. Here's some of the things I'd suggest:

That's about it. There's a short orientation film you can watch when you first arrive. As you're working, the volunteers and staff at the FHL will be more than happy to answer all the questions you ask, like where to find things, how to work the printers and scanners, and where the snack room is. You’ll be in good hands.

My first visit to the FHL was both exhilarating and exhausting. I made some great discoveries—one of which I wrote about in “Striking Gold in Salt Lake City”—and found a lot of information about my ancestors. Here’s hoping that your first visit will be everything you've dreamed of!

Note: This post is a reprise of the one I wrote for the FGS Voice Blog, Tips for Researching at the Family History Library, published December 8, 2014.
Unknown at Thursday, December 18, 2014 5 comments:
Share

Old newspapers are full of fascinating little tidbits for family historians. If you're like me, though, it's not always your own family that you find. While browsing through microfilmed papers at the Ohio History Center a few weeks ago, I came across this notice in the October 5, 1836 edition of The Ohio People’s Press, published in Columbus: 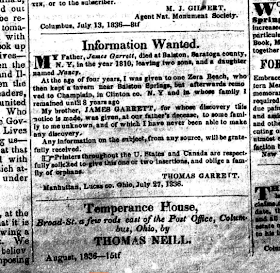 At the age of four years, I was given to one Zera Beach, who then kept a tavern near Balston Springs, but afterwards removed to Champlain, in Clinton co. N. Y. and in whose family I remained until 8 years ago.

My brother, JAMES GARRETT, for whose discovery this notice is made, was given, at our father’s decease, to some family to me unknown, and of which I have never been able to make any discovery.

Any information on the subject, from any source, will be gratefully received.

Printers throughout the U. States and Canada are respectfully solicited to give this one or two insertions, and oblige a family of orphans.

Reading this, it struck me that newspapers were the Facebook of our ancestors’ time. Social doings, political comments, marriages, divorces, births, deaths, personal announcements, even requests for help from sympathetic strangers—all this and more found its way into the newspaper.

Merriam-Webster defines crowdsourcing as “the practice of obtaining needed services, ideas, or content by soliciting contributions from a large group of people and especially from the online community rather than from traditional employees or suppliers.” (2) It’s a new word, one we associate with social media in the digital age. But as this notice shows, it’s hardly a new concept.

The Boston Pilot, for instance, published thousands of missing persons notices for Irish immigrants over a 90-year period. The notices were often submitted by relatives in Ireland seeking information on loved ones whose whereabouts in America were unknown. Today, those notices are a valuable resource for genealogists trying to connect Irish immigrants with their families. Boston College has created a free searchable database of these "Missing Friends" notices, Information Wanted, to assist researchers.

But back to Thomas Garrett. I find myself wondering how widely his plea for help was published. Was he ever reunited with his brother James? It’d be nice to think he was.

I wonder, too, if anyone researching the Garrett family today will find this digital reposting of his plea. Maybe it will help someone connect Thomas, James, and Nancy Garrett as the children of James Garrett, who died in Ballston, Saratoga County, New York, about 1810.

You never know. In any case, I rather like the idea of bringing Thomas’ 1836 search to the World Wide Web in 2014.