In the spring of 1929, Willard Bishop faced a dilemma. With an auto garage business and growing family in Garrettsville, Ohio, he liked to get away to go fishing whenever he could. A few years earlier, he’d bought a vacant lot on the hillside shore of Lake Milton, about 20 miles away. But where could he and his fishing buddies sleep when they wanted to spend the night there?

Lacking the resources to build a house, Willard fell back on what he knew best: automobiles. Born February 21, 1892, he had started tinkering with cars as a teenager, and landed a job as a mechanic by 1917.[1] Why not build a little cabin on wheels?

Willard enlisted the help of a friend, blacksmith Welty Rood. The lack of a blueprint didn’t discourage them. They cleared out a bay in Willard’s repair shop and got to work.

Starting with an old four-cylinder Model T Ford, they removed everything except the engine, windshield, and front seat. They constructed a box to fit over the bare chassis. Inside they built two sets of bunks, and installed an icebox and sink. A small table and chairs completed the setup. Willard wired it with electric lights and cut out windows. It was tight, but four people could sleep safe from the elements, wash up, and keep some food brought from home.

There was just one problem. The contraption was too high to get out of the garage.

Their only recourse was to cut several inches off the top of the camper. Willard’s head nearly touched the ceiling of the new top. Even then, it wouldn’t clear the garage door. So they let the air out of all the tires, and with the help of a few other fellows, crept the motor home gingerly out of the garage.

With the tires re-inflated, Willard and Welty drove the homemade camper slowly over the winding road out of Garrettsville. They passed through the town of Newton Falls, continuing down narrow County Line Road to Lake Milton. There was no hurry; it would be her only voyage.

Positioned proudly on the lot, the camper reigned over the lake below. With the addition of an outhouse and fire ring, Willard and his buddies could fish, eat, and sleep in comfort all summer. After a long winter, it sat there waiting to welcome them back.

Soon Willard’s kids were clamoring to go to Lake Milton, too. He started taking his three boys fishing and boating with him. The shack, as they called it, was too crude to suit his wife, Annah, and their daughter. Willard eventually bought a factory-made motor home for the ladies and himself, leaving the shack to the boys. The new one even came with a kitchen.

In 1940, Willard sold his property and purchased two nearby lots, one of which held a small 1928 cottage. While the cottage still required use of an outhouse, it felt luxuriously spacious compared to the campers. Now the family could enjoy quiet mornings overlooking glass-still water, hot afternoons of swimming, and lingering twilights all summer. Willard usually stayed in Garrettsville to work during the week, joining them on weekends.

The old Model T shack made the move, too. Its hand-cranked engine sprang to life even after years of disuse. Willard kept it for storage for a few years, finally taking it away during World War II. Although it would be forgotten until the discovery of a photo decades later, its legacy was firmly established. Willard’s son and his wife, their children and grandchildren still gather at the lake for a family reunion every summer. And while a bathroom was installed in 1983, the place is no bigger than before. Leading to another dilemma: where does everyone sleep? 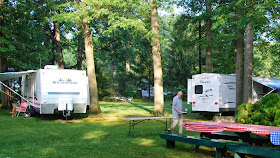 Ah, what Willard would have given for one of these modern beauties, with their slide-out sitting rooms, full kitchens and baths, and queen-size beds.

Then again, maybe not.

The blog series “52 Ancestors in 52 Weeks” is coordinated by Amy Johnson Crow, CG, author of No Story Too Small.

Thank you for reading my blog! I welcome and appreciate your comments.